An Irish language version of this article is available here.
Irish television channel TG4 has removed the first ever Irish language NFT (Non Fungible Token) from circulation as the artist behind the images never gave permission for the images to be minted.
Paul Givan resigns as Northern Ireland First Minister as Protocol takes spotlight
The images were first posted by BLOC, a TG4 subsidiary which produces content designed with young adults in mind.
The Naofa’s Focain Traochta collection (Holy and F***ing Exhausted) was minted to the blockchain via the OpenSea platform, which also hosts the controversial Bored Ape Yacht Club collection.
The collection was as part of celebrations for St. Brigid’s Day on Tuesday (1 February). 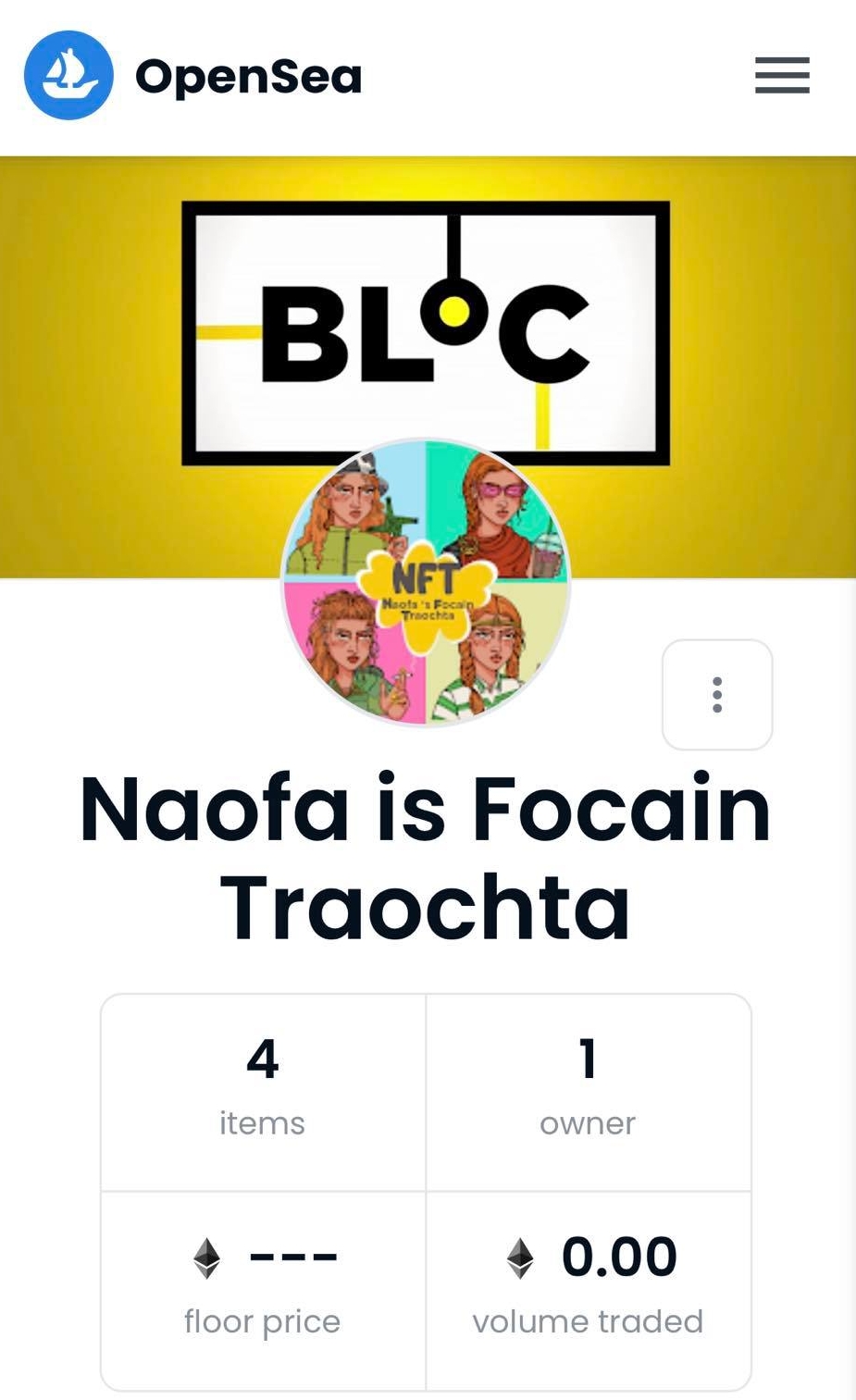 The pictures were shared on Twitter as well, along with the link to the OpenSea page.
The images remained available on the site for around five hours, until the artist who designed the pieces, Louise “Selkies” Ní Chuillin, tweeted that she had never given permission to the channel to mint her pieces.
This drawing was commissioned as a pisstake of NFT art, the Bored Ape style thing, which I was into because I think NFTs and crypto are fucking stupid.
I never gave permission, and was never told, that anyone had it in mind to actually make a bleedin NFThttps://t.co/cjjAI9An9R
— Big Sickle Energy 🐄☭ (@Selkies__) February 1, 2022

Government promises financial package to help public tackle fastest rise in cost of living in “20 or 30 years”
“This drawing was commissioned as a pisstake of NFT art, the Bored Ape style thing, which I was into because I think NFTs and crypto are fucking stupid,” Louise tweeted.
“I never gave permission, and was never told, that anyone had it in mind to actually make a bleedin NFT,” she added.
The tweet has since been removed from BLOC’s social media channels, but the original designs remain to be seen on their Instagram account. 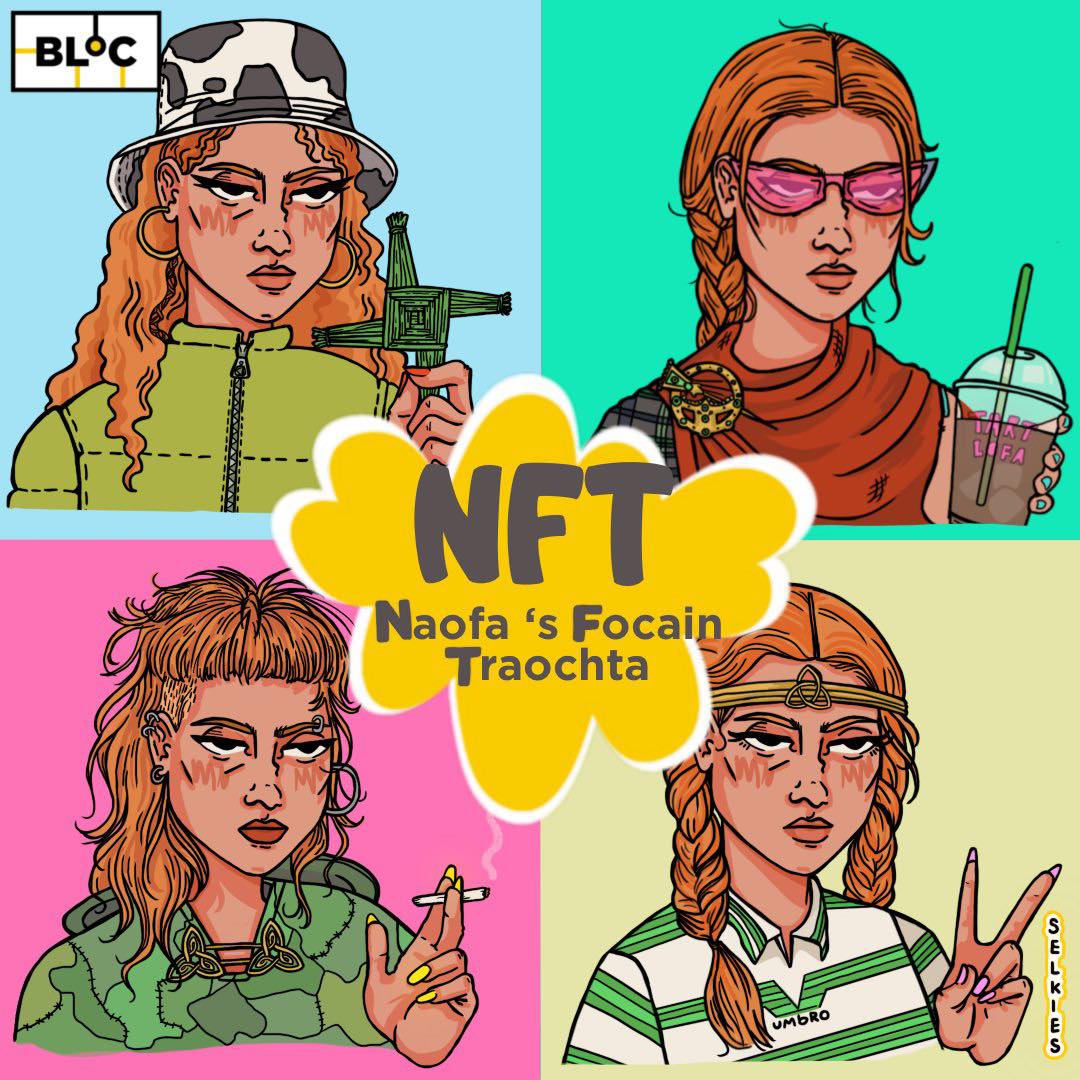 Woman in her 60s arrested over million-euro cryptocurrrency investment fraud
BLOC reached out to people who criticised the move to mint the images and asked them if they would want to create content around the controversy surrounding NFTs.
In a statement sent to JOE, TG4 said that the social brand “wanted to start a discussion about NFTs through their social media platforms”.
“While there is some awareness of NFTs, a lot of the audience who follow BLOC have very little knowledge of them,” the statement read.
“BLOC commissioned an NFT-style graphic from artist Selkies to raise awareness of NFTs.
“It was never intended to sell her work.
“Although she was aware that it was an NFT-style piece, she wasn’t aware where it would be published online. She contacted BLOC yesterday, and the image was removed from the OpenSea site immediately,” the broadcaster concluded.
An NFT is a piece of data on the blockchain that can be sold or traded. This data could be anything, but it has generally been used to purchase images.
Minting data to the blockchain requires an enormous amount of computing energy, which in turn creates large carbon emissions.
OpenSea, the site that BLOC used to mint the images, has emitted more than 68.7 million kilogrammes of carbon since launch, 11 million more than the entirety of Ireland’s greenhouse gas emissions in 2020.